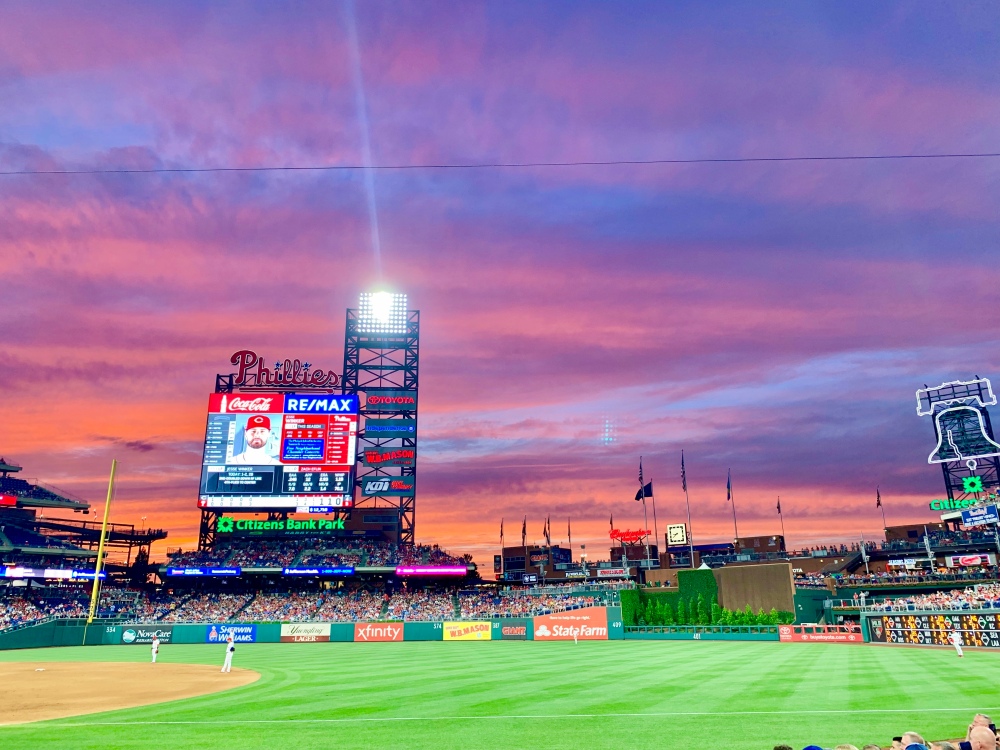 Next game: Fenway Park in Boston

Miles traveled to get here: 305

The home team took another one today, and this game provided a bit more excitement; both of the first two contests I saw were five-run spreads, so it was fun to go to the late innings with the game still in doubt. And the crowd in Philly was definitely into the game; where Pittsburgh had been sparsely attended and Milwaukee had been lopsided, this one provided a bit more electricity. Love him or hate him, the presence of Bryce Harper doesn’t hurt, either. Harper didn’t do much in the game, but most of the fans I asked about him said that he really WAS pretty well-liked in town thus far. “Of course, that doesn’t mean that we won’t boo the hell out of him if he strikes out right here,” one guy told me. Harper singled in that at-bat, which eventually helped lead to an insurance run.

At the beginning of my Pennsylvania trek, I once again tried my luck with the bus. Only this time, instead of just attempting to get from the airport to the stadium, I was actually taking the Greyhound the whole way, six hours from Pittsburgh to Philly, most of it spent bouncing spasmodically up and down. Or with my seat-mate’s head coming to rest on my shoulder. Or with the guy behind me swearing incessantly about his horrible 36-hour journey home from Dayton to Philadelphia. A bus traveling across Pennsylvania is actually a pretty good place to realize that you’re doing OK in life.

The biggest problem I hadn’t anticipated was that it was just about impossible to actually DO anything productive on the bus. The bouncing made typing on a laptop a test of wills, and even when we hit a relatively flat stretch for perhaps two minutes at a time, the guy next to me was doing his best Paul Anka. So I gave up on trying to type up the Milwaukee blog post and mostly just looked out the window and nodded in and out of consciousness and listened to music; having just heard that Dr. John had died, I shuffled through some of his greatest hits.

We finally got to Philadelphia around 12:45 and I decided to search out a wifi signal, which proved to be another challenge. There’s now zero doubt in my mind that Philly has the worst wifi accessibility in the country: I tried a coffee shop near the Liberty Bell but they had nothing to provide. I tried the national park visitor center, where someone told me that a signal was free and required no password. Which was accurate, except that wifi worked at 1776 speed. I’m pretty sure I saw a revolutionary-garbed woman who was responsible for cranking out the entire city’s wifi access on her spinning loom. Admirable, for sure. But ineffective.

Finally, I just gave up and started looking for something much more plentiful in Philadelphia than internet access.

I’ll be honest, I’m generally not interested in food battles. Like, which is better? Lafayette Coney Island or American Coney Island (answer: who cares. They’re both delicious). Or which breakfast place in Denver has the best Denver Omelet? (answer: I’m not sure because I’ve never really thought about it). And one battle that I REALLY don’t care about is which Philly cheesesteak is the best. I honestly don’t say this to demean the people who are totally into which Philly cheesesteak is the best. No, I say this because I can promise you that no matter which one I eat I am going to love it. I love cheesesteak, and I’m not interested in you telling me that such-and-such a cheesesteak is better than another such-and-such a cheesesteak because it’s off the beaten path or because it’s made from a better brand of beef or because Sylvester Stallone himself once punched the restaurant’s beef in a meat locker. I AM GOING TO LIKE IT NO MATTER WHAT.

I know what you might be thinking: hey, aren’t you the guy who goes around comparing ballparks? Aren’t you doing the same thing that you just told us not to do? Well…sorta. But also, as I’ve mentioned a few times, I have never had a BAD experience in a ballpark in my life. Ever. No matter which stadium I go to, if I’m watching a ball game, I’m gonna love it.

And thus ends my dissertation on how cheesesteaks are like ballparks.

Anyway, I went to Sonny’s Famous Cheesesteaks on Market Street and guess what? It was the greatest cheesesteak I’ve ever eaten. And yes, it’s likely I would have said that about any other cheesesteak I ate that day. I ordered it with Cheez Wiz and grilled onions because there was a sign taped to the counter that said Sonny himself ONLY ordered them this way, and who was I to argue with Sonny? I think it’s quite possible that people who argue with Sonny end up riddled with bullet holes outside tollbooths in New Jersey.

(interlude: as I write this it’s half-past-midnight and I’m at the Boston Greyhound station waiting for an NYC Express bus and listening to a woman argue on the phone with her husband about whether or not they’re going to buy a new truck and she’s talking AT THE TOP OF HER LUNGS. I feel I can safely say that none of us in this bus station think the two of you should buy this truck, especially if it’s going to be $11,000, which I know is the cost because she’s said that seven times now.)

(second interlude: now as I write this I’m in an Au Bon Pain bakery at Penn Station in New York at 5:41 a.m., waiting for the 6:15 LIRR train and a kindly old Jamaican woman at a nearby table woke up to tell me she was on her way to California. “That’s where I came from,” I said. “Really? I’m going to San Diego. I need a job and I need to go to college. Are you from San Diego?” “No, I’m from San Francisco.” She paused. “Really? I’m going to San Francisco then. They have jobs?” “Yes, I think so,” I said. “Maybe you’re my guardian angel sent to direct me.” I mean, that’s kind of a lot of pressure. I’ve only been in New York for like 20 minutes and I’m so disoriented I don’t know which way is up. Luckily, now she’s sleeping again, so it’s possible she wasn’t totally serious about this plan.)

On my way out of Sonny’s I noticed a couple of Phillies fans looking for a table and decided I’d see if they might chat for a while.

“So, let’s start with your names and what you ordered,” I said.

“It’s my personal favorite,” Dustin said. “If I have someone from out of town, I bring him here.”

The two friends have been to hundreds of Phillies games over the years, although now Chris lives in Florida so taking in a game is more of a special occasion. Dustin’s roots with the team stretch back to his youth.

My dad used to work at the Vet,” Dustin told me. “He ran a little merchandise cart.”

One of the best games he ever attended was the game where Philadelphia clinched the 2007 NL East on the last game of the season; the fans were scoreboard-watching the Mets game, and when it became official that the Phillies were playoff bound, the players stormed on the field and were spraying the fans with champagne. The team hadn’t won anything since 1993.

Dustin has been to 18 ballparks and definitively says that Citizens Bank Park is in his top five.

“I think Fenway’s number one. My brother and I go back and forth. I love Dodger Stadium, the Bank here in Philly. Wrigley, Fenway, Baltimore.”

I let Dustin and Chris finish their sandwiches and resumed my hunt for wifi, wandering up Market Street until I found 2nd Story Brewing at 117 Chestnut. It was pretty empty, so they were nice enough to let me nurse an IPA for an hour-and-a-half while I typed and they played Kendrick Lamar loud enough for the older couple next to me to look up every time they heard words they were surprised to be hearing. After I finally finished posting that first blog, I caught a ride up to my room to dump my stuff and take a quick nap.

The park was about a mile-and-a-half from my AirBnB, so I figured I could walk it; it wasn’t the greatest neighborhood, but felt safe enough, and there was a little league game going on in the not-too-distant shadow of Citizens Bank Field. Unlike in Pittsburgh, where PNC Park is neatly tucked into its urban setting, The Bank (and the neighboring Lincoln Financial football stadium and Wells Fargo Center) is off away from most of the rest of Philly. It works just fine, and doesn’t necessarily make that much difference once you’re inside the gates, but I always like ballparks a little more when they’re surrounded by city life instead of parking lots. My following day in Boston is the ultimate example of that mesh of city center and ballpark. 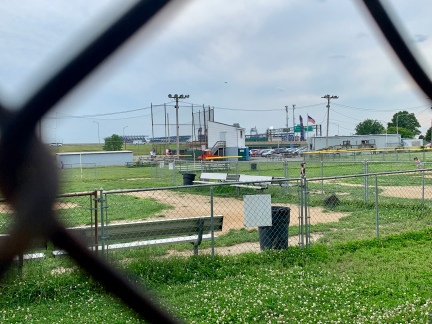 Location notwithstanding, the stadium itself is lovely and I’d argue pretty underrated as far as the newer parks go. The deep blue and red color scheme contrasts nicely with the field, and the entire area has a nice, clean feel to it. 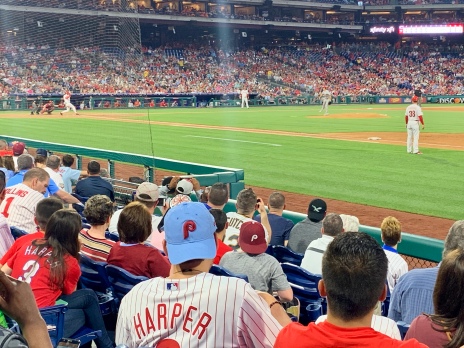 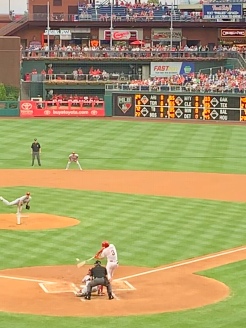 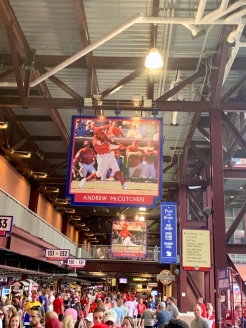 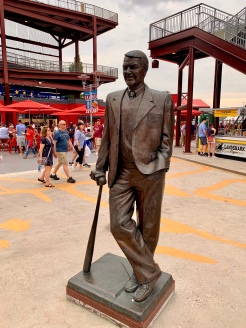 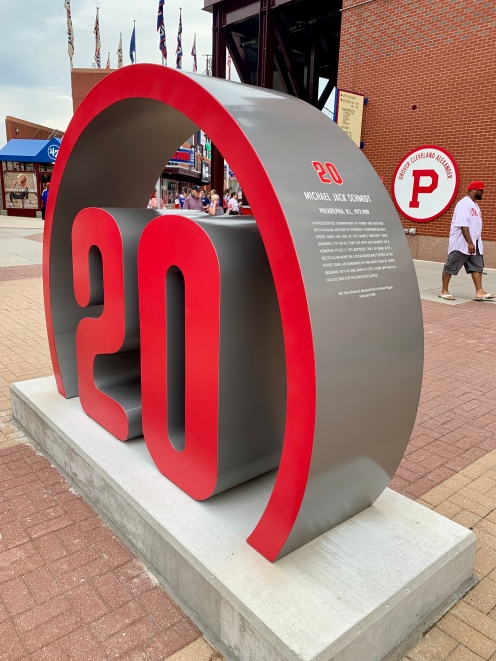 Shortly before the National Anthem I stumbled across a family in the left field standing room section. Dennis and Gina have four girls, three of whom are triplets: Maddie, Mia, Marissa and Meredith. They are from Mokena, IL. Dennis told me that they often tried to work a ballgame into their family vacations. They were clearly having a good time and Dennis was excited to hear details of my trip. We took a photo and I told them to watch for it on the blog.

I never actually saw the seat I bought, as the standing room sections at the Bank are top-notch and there was a fair amount available space, even in a game that drew 33,000. I had a great view from nearly directly behind home plate before I decided to stroll down the first base line a bit.

While I was there, an older guy was speaking animatedly and fairly profanely to someone on his cellphone, wondering why that person wasn’t already there so that they could head down to their seats. It turned out that the person on the other end was his son, who apparently wasn’t going to show up any time soon. “You here by yourself?” he asked me. “You want a ticket? Here, take this ticket. It’s down there.” He was right; it was “down there” in the fifth row. I thanked him and headed down to my fancy seat (and the one next to it, since I knew that one wasn’t going to be occupied either). Thanks, random stranger!

From this seat I was able to witness one of the best ballpark sunsets I’ve ever seen: purples and oranges streaking the sky behind the left field scoreboard. I kept comparing cell phone photos with the woman sitting next to me, and it seemed as if every couple minutes it somehow became even more stunning. Of course, posting such photos to social media was essentially impossible because the internet connection in Citizens Bank Park is somehow worse than it is in other places across the city.

Once the sun set, the hopes for the Reds set as well; the Phils tacked on a late run to finish off Cincinnati, 4-2. All-in-all, a very pleasant night in Philadelphia.