Miles traveled to get here: 203

I know you’ve been waiting to hear about how the overnight bus trip from Boston to New York went. Here’s the answer: pretty much as expected.

After leaving Fenway park I walked the two-and-a-half or so miles back to the Greyhound station, which is where I started out that morning. Boston was hopping, and people were clearly a wee bit over-served and excited to be out on the town on a Saturday night. I figured I’d try to sit in the same transportation center I used before and type for a while before I got kicked out. The door to the food court was still open, although the only people around were a woman with a mop and a bored security guard. I sat in the same seat I took that morning and just pretended like I was supposed to be there. It worked for a while, but eventually the guard told me I had to leave. “You can stay in the vestibule, if you want,” he said nicely. “You just can’t sleep there like that guy.” There was a guy in the vestibule who looked like he had been there a while. “No, that’s fine,” I said. “I’ll just head over to the bus station.”

The Greyhound station was exactly as weird as they always are. People screaming into cell phones to make sure the entire place hears them. Old guys taking off their shoes who probably shouldn’t be taking off their shoes. People pulling wagons full of giant subwoofer speakers through the terminal. The usual.

I realized on this second Greyhound trip that there’s a weirdly strategic ritual dance that goes on when people are picking their bus seats. You first try to sum up exactly how many people are boarding, relative to the number of rows on the bus. Then you have to make a split second critical decision: do you (a) look for the person who looks least like an ax murderer and sit next to them OR (b) grab an open row and take your chances with having an ax murderer choose to sit next to you. Here’s the kicker: the payoff for going with the second choice is that you might just end up with your own row. My brother-in-law referred to this as ‘Greyhound Roulette.’

I chose the second option. And I ended up with my own row. It was a Boston miracle.

This bus was significantly less bouncy than the one I took to Philly, so that was nice. I slept a bit but couldn’t really get comfortable and we actually arrived about 45 minutes AHEAD of schedule, which was great but also meant getting into the Port Authority around 4:30 in the morning. I wandered around the bus station in sleep-deprived daze, trying to decide on my next move. Ultimately, I figured out how to get to Penn Station (a really interesting walk at that hour) to catch the Long Island Railroad train out to Manhasset. I got a few hours sleep at my sister’s house, did my laundry, and took a shower. And felt mostly human again. 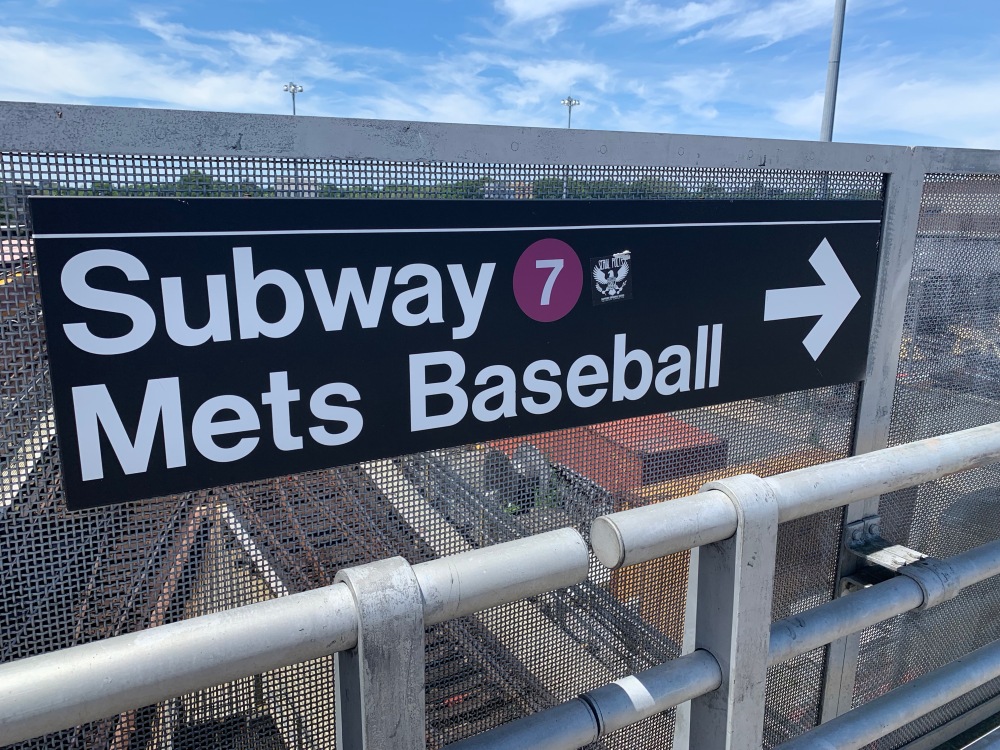 (editor’s note: as I write this I just boarded another bus, this one from NY to Baltimore. I took my chances on an empty row again, and won. Huh. Maybe the guy who looks like the ax murderer is ME?)

My good friend Casey Nichols, fresh off his retirement from teaching after three decades in the classroom, had made plans to meet me in New York to check out Citi Field and Yankee Stadium, so when he arrived we set out on the LIRR for a 1:00 Mets/Rockies contest.

Citi Field is a solid, mostly unspectacular park surrounded by empty lots and junkyards. Peering out at the landscape from the stadium you feel a bit like you’re in an episode of the Walking Dead. The Flushing Meadows tennis complex is next door, and there’s a pretty cool boardwalk entrance from the train leading you to the park. Other than that, looking at the surroundings is…not recommended.

The entrance rotunda to Citi Field, though, is gorgeous. Dedicated to Jackie Robinson, the entry way behind home plate looks like an upscale hotel lobby, complete with stunning staircase. The Mets’ Hall of Fame, off to the right as you enter the rotunda, is free and super cool. 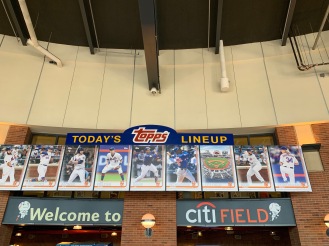 Quick detour story about my love of the Mets: in 1985, my Aunt Jane was able to secure a Dwight Gooden uniform from an AT&T commercial shoot she worked on. I became an obsessive Mets fan that year (and the next, of course), wearing the uniform during my final Halloween as a trick-or-treater. As a 12-year-old, I spent the summer of 1986 meticulously cutting out the box score from every Mets’ game and pasting them into a photo album, which I can no longer find, sadly. The Tigers have always been my favorite team, but the Mets were the second-favorite for many years. So I was particularly intrigued by the Hall of Fame, which spends most of its energy on the 1969 and 1986 teams. It is well worth your time if you visit the park.

The most noteworthy aspect of sitting in Citi Field is that you are bombarded by noise during the entire game. Part of it is the airplanes that scream by from behind the centerfield scoreboard. But even more significant is the fact that music plays between seemingly every pitch.

Casey and I chatted about his baseball fandom for an inning or so. You can check out the full transcript of the interview here.

Food options at Citi Field are really impressive and wide-ranging. Casey and I went with the Pat LaFrieda sandwich, and enjoyed it, although $19 may have been a little steep. I also sampled the Arancini Bros. balls, which were risotto balls with various fillings; these were excellent. I ordered all six in the variety pack: Ragu, Sausage & Peppers, Buffalo Chicken, Pizza, Taco and Nutella. There’s a great deck with picnic tables in the food court area, and it’s in the upper deck so you don’t have to go far if you’re in the cheap seats.

Noah Syndergaard dominated the game, only allowing one (somewhat questionable) hit through his seven innings. The Rockies weren’t able to mount any challenge at all, and it was fun to hear the guitar riff of Zeppelin’s ‘Immigrant Song’ each time Syndergaard strode to the plate, his golden locks flowing in the wind behind him.

Our seats were in the upper deck, near the right field foul pole, and next to a wonderful family at the game from Florida. Ed is a diehard Mets’ fan. His daughter, Edlyn, was born in the Bronx and loves her Yankees. Ed has seen the Yankees lose in person 16 times; it’s somehow happened every single time he’s been at Yankee Stadium.

“Do you openly root against the Yankees when you’re at the game?”

I also had some time to complete a full circuit of Citi Field in the middle innings; it must have been the fifth, when Rockies pitcher Jeff Hoffman gave up the last two of his six earned runs and was pulled. I felt like I took a really long time (including picking up the Arancini Balls and waiting forever for them to finish cooking the Ragu ball), but by the time I got back up to my seat I swear it was the same inning.

Along my journey I crossed Shea Bridge and there I met Eddie the Cow-Bell Man, who has been banging away on that cowbell for nearly four decades. Since I consider myself something of an accomplished percussionist myself, I felt compelled to chat with him, one cowbell guy to another. He was incredibly gracious with his time, and thanked me profusely when I invited him out to the bleachers section at the Coliseum, where the A’s fans are drum-crazed (and lovable!) lunatics. He fist-bumped me and hugged me. And then he hugged me again before we said goodbye. And then after I walked away he called me back to ask me something else about the Coliseum, and we fist-bumped and hugged again. He was one of my favorite people I met on this trip.

Finally on our way out of the ballpark I had what I consider to be my perfect New York moment: getting yelled at by a subway system employee.

Casey and I made the mistake of thinking we were getting on a subway line instead of the LIRR. So as we approached the megaphone guy, I figured it wouldn’t hurt to ask. “Sir, does this train go to Manhasset?” He may have shook his head but I’m not sure. Another passenger trying to be helpful, on the other hand, said “Yes” at the exact same time. “He said yes and I think you said no, I’m not sure what to do here,” I offered. He walked away to megaphone somewhere else. “Well, thanks a lot for your help!” I said and probably shouldn’t. He turned around immediately from about 30 feet away. He didn’t need to use the megaphone but he did anyway.

I didn’t have a reply. Or a megaphone, but we eventually found the train on our own. All in all, a quintessentially New York kinda day at the ballpark.