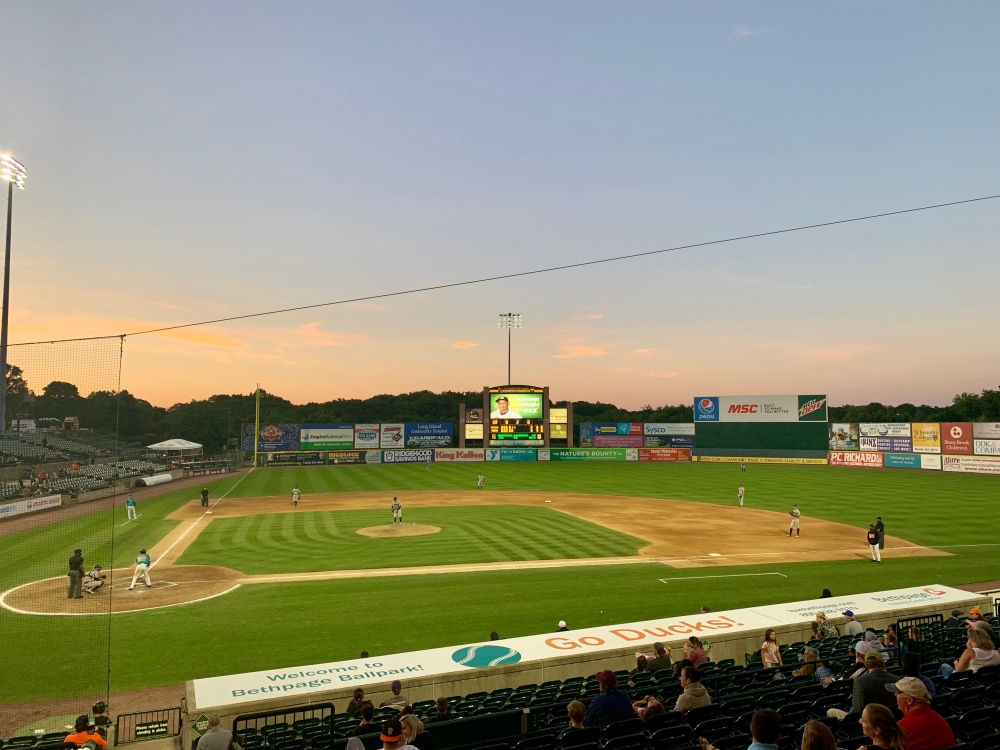 Next game: Camden Yards in Baltimore

Miles traveled to get here: 34

What a treat. After six games in Major League Stadiums over the last week, I have a chance to relax at a minor league park with family. While I’ve been in New York, I’ve been staying on Long Island with my sister, Beth, her husband John, and their two super fun kids, my nephews Johnny and Patrick.

Immediately after I arrived back at their place following the Mets game, I was required to play 17 different sports with Patrick. Maybe it just felt that way. We started with Pickle (you know that one, right? two people with gloves toss the ball back and forth as a runner attempts to make it safely between the two bases. Johnny was the runner. We never once got him out. Then we did a little street hockey, which I lost 3-2, although Patrick was shooting into the actual goal and I was just supposed to be getting the puck past an imaginary line between their house and the neighbor’s, so I’m not sure if the result is official. Then we tossed the football. Then played lacrosse. And we finished off with badminton. I was officially ready for a nap.

I also had a chance to go to Johnny’s country presentation at his school the next day, which was amazing. He and his partners created a slideshow and a tri-fold board and a word search and a whole bunch of other stuff. I now feel like an export on both Japan and Mexico.

After leaving Yankee Stadium around 4:15 or so, I worked my way back to Long Island on the subway and LIRR. I missed an earlier LIRR train by about a minute, and would have been able to get to the Ducks game on time, I think, had I known to run to the station. The Long Island Railroad station is kind of crazy if you’ve never experienced it; passengers wait impatiently for their track number to appear on a big board in the terminal, usually about 5-10 minutes before the train is set to leave. And once it pops up they all sprint to the train. If you don’t know what’s happening, it’s a little freaky.

Still, had I made that earlier train, we wouldn’t have been walking in after the Ducks game already started. And if we hadn’t been walking in late, we wouldn’t have been able to get not one but TWO foul balls that had just been hit out of the ballpark near us. I think Patrick now assumes that you just get a bunch of baseballs every time you go to a game; he got a third ball from a high school kid sitting in front of us who made a nice grab on a foul popup late in the game. At that point Patrick announced that he would like to get a total of six baseballs before we left, to match his age. Sadly, though, he was only able to secure those three. Next time.

Bethpage Ballpark is a beautiful facility with all of the charm of the best minor league parks. Most MiLB fans love the fact that there’s a chiller atmosphere at these games, a folksiness that allows for silly spinning-bat contests between innings and hand-written league leader whiteboards behind home plate.

It was a relief, honestly, to be able to chat with fans and ushers without feeling like they assumed you wanted something from them. Our seats were along the third base line, about six rows up from the visitors’ dugout. We grabbed some hot dogs and enjoyed the game.

About halfway through we started hearing the most amazing voice coming from the concourse behind us. A dude who sounds like a cross between Daffy Duck and Darth Vader and a cement mixer would boom “LET’SSSS GOOOOOO DUUUUCCCKKKKSSS!” every couple of minutes. You really have to hear it to believe it, I’m not kidding. Listen until the end. It’s only about a minute.

Tom and his wife Sharon have season tickets to the Ducks and sit in the same spot for every game, at the very top of a row just to the third base side of home plate. Tom loves the minor league atmosphere.

“It’s the biggest bang for your buck,” he told me. “The entertainment is awesome!”

Tom recently had vocal cord surgery and is experiencing some paralysis there, but the surgery went well and now he’s pain-free. Even, somehow, when he bellows out his trademark call. 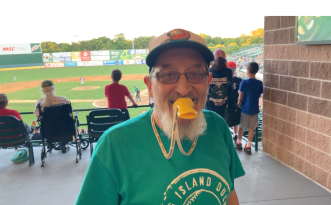 Speaking of duck calls, you’ll hear them all over the park. It’s a fun noise, and shared by kids and adults alike, I tried to get a video of the guy in this photo, but I messed it up and only have a still photo instead. But you know what a duck call sounds like, I hope. It sounds like a duck. Only sort of weird and maybe a little drunk.

There’s a really cool bar area down toward the left field foul pole, but it was empty, this being a Tuesday night. The bartender, who had zero customers, told me he was kind of relieved because both games over the weekend were absolutely packed. I could imagine it being an excellent place to gather and have a drink. 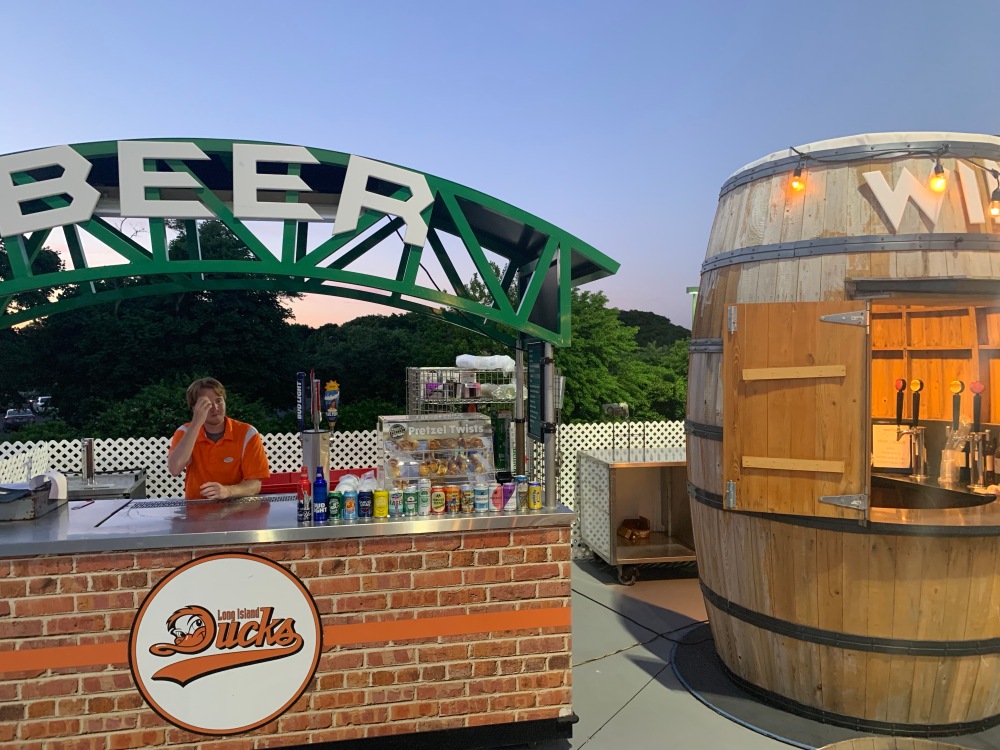 The most interesting aspect of the Ducks’ team is that it’s littered with former mid-level major leaguers, who I imagine are either trying to keep sharp for another shot at the big show, or just enjoy playing the game so much that they’re not ready to quit.

Steve Lombardozzi and Lew Ford are probably the biggest draws; both of them are names that, when you see them on the lineup card, you immediately say “wait. THAT Steve Lombardozzi?” and likely follow it up with “wait. THAT Lew Ford?” Ford hit .300 for the Twins in 2004 and finished 24th in MVP balloting; not too shabby. Ezequiel Carrera leads off and plays centerfield; in his first Major League at-bat for Cleveland in 2011 he bunted for a single and drove in the game’s winning run. As recently as 2016 he had a four-hit game for the Blue Jays and played in 110 games. Other major leaguers have tried their hand with the Ducks in the past, too, including Dontrelle Willis. Former Met and World Series champ Wally Backman is the team’s manager. Lee Mazzilli’s kid, L.J. plays second base. The Ducks are not a Major League-affiliated franchise, which probably helps draw big leaguers. Plus I think a fair number of them live in the area anyway.

Still, despite the ties to the Big Leagues, there’s a definite small-show feel to things, which is exactly what you want. The bullpens are out beyond the fences in the corners; the visiting pen sports a junked-out basketball hoop. Relievers sit perched above the outfield walls, which are predictably covered with advertisements for local businesses.

The game itself was the most exciting I’ve seen on the trip so far, and it’s not even close. The Ducks fell behind early and trailed for much of the contest, until the bottom of the eighth. Down 2-1, the first two runners reached, and then a tailor-made double play ball leaked through the legs of Somerset’s shortstop. The Patriots still nearly worked out of the trouble with another twin-killing chance, this one executed successfully. But then Kirk Nieuwenhuis (31 MLB homers to his name) drove a two-out, two-run blast deep over the right-centerfield wall to take the lead. The 4,238 fans at the park went nuts. 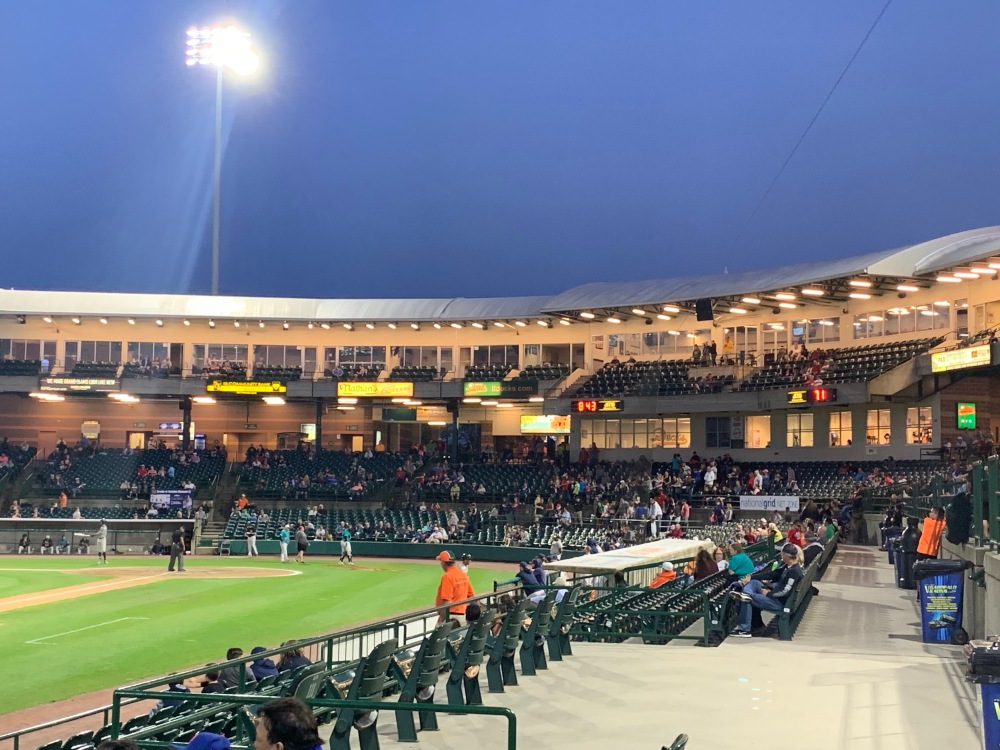